I was tagged to do this wonderful Liebster thing by my lovely wife Faith McKay over on her blog. I watched her struggle with how to answer the questions she was given, so I guess she thought she would repay me with the same plight. Nah, if it didn’t look fun, I wouldn’t have revamped my whole website before taking the time to do it.

So, what is this Liebster thing, anyway. The image below explains it pretty well. I’m going to answer some questions, give some facts about myself and then nominate some other poor souls to do the same. I’m sure you’ll learn something fun about me along the way. If not, I’ll pack in this blog and never write on it again, because that’s how the internet works. Right? 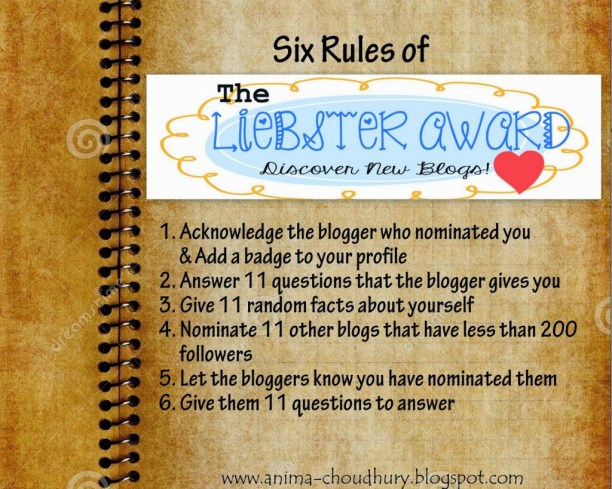 What was the first story you ever wrote?

I really have no idea what the first story I wrote was. The first thing that comes to mind was in sixth grade when I wrote a kaiju story about a giant Tasmanian devil. It was pretty awful.

What was your favorite book as a child?

Honestly, I don’t remember much of my childhood before about 4th grade and I was a pretty peculiar 4th grader. The first book I remember the title of that I read in 4th grade was The Sword of Shannara by Terry Brooks. I could barely lug that thing around and I don’t know if I ever finished it when I was little or not. Actually, I think the book was some random one somewhere in the middle of the series. It took me forever when I got older to figure out what that book was and find it.

You get to have dinner with your favorite fictional family. Who’s at the table?

They may not be related, but they are a family anyway. The crew of Serenity, all nine of them. There would be so much fun and laughter. We even got a glimpse on Simon’s birthday.

What’s your favorite season of Buffy the Vampire Slayer? (If you’ve never seen it, I’m giving you the look.)

It’s always kind of a toss up for me. There are so many parts of different seasons that are so good. I’m going to have to say season three if you give me the look though. The Mayor and Faith make such a wonderful pair.

Do you prefer drafting or revising? Why?

Gonna have to go with revising because I haven’t ever really gotten around to editing much of anything. Might have to work on that…

Do you have a process for naming your characters?

I really have to dig through my brain until I find a name that feels suitable. For the most part looking for names outside of myself never really works. It’s one of my major downfalls. I can’t really write a character until they have a name.

How do you handle telling people you’re a writer? Do you tell them what you write?

I used to have a hard time with it because I didn’t really feel like one. Now that I’ve gotten a couple of drafts completed it’s getting easier. It will be a lot easier when I have something actually out that people can buy. Telling them what I write is a bit harder because I always feel like a weirdo. I’m starting to relish the weird looks I get though.

What do you listen to while you write?

If I’ve made, or found a good playlist for a particular project, I’ll listen to that. If not, I’ll usually listen to the Deep Focus playlist on Spotify because it’s mostly wordless and is good for keeping me from getting distracted. When things are going really well with the writing though, sometimes I’ll forget to turn the music on and will just be sitting there with my earbuds in my ears, but with nothing playing in them.

Do you prefer to write in the morning, or at night?

Morning mostly. Most of the time it feels like living through the day eats my creativity.

Do you pick favorites with your own characters?

I don’t know. It’s hard for me to really say? My MC is almost always my favorite, I guess.

A ginormous double desk in a T shape that I would share with Faith. We would each have 3 monitors, because I had that at my last job and it was amazeballs. There would also potentially be another monitor between our desks that we could share so we wouldn’t have to get up and come and look at one another’s screen for things. There would probably be a really nice couch for laying on and spacing out while thinking through story stuff. On the walls would be lots of cool writerly art and such. There would also be a bookshelf that only holds our books in a nifty lighted display. (We’ve thought about this a lot.)

ELEVEN RANDOM FACTS ABOUT ME

I worked (and lived) at an independent retirement community for two years.
Not only can I touch my toes, I can touch my palms to the floor right beside my feet without bending my knees. (Short legs and long arms…like a monkey.)
I’m vegan and haven’t eaten meat in over 10 years.
I used to hate the idea of all reality TV, and then my wife got me into Survivor. I love it and can’t wait to get into the current season.
I’m a tech junkie, and would probably buy a new gadget every week if I could afford it.
My favorite genre of movie is the mindfuck/mindbender. If it has a really weird/cool angle that makes you think, I love it. Think The Matrix, Fight Club, Memento, The Cloud Atlas.
In recent years I’ve become a total comics fanatic. Mostly I prefer non-superhero stuff because all of the DC/Marvel stuff has been going so long it’s hard to jump in. Though I have gotten into Ms. Marvel and just picked up Spider-Gwen #1. My current favorite ongoing series are Saga, Rat Queens, Sex Criminals, Buffy, and Angel and Faith.
I love Sriracha hot sauce (Rooster brand, obvs.) I’d put it on almost anything.
I won’t watch TV episodes out of order. It’s from the beginning, or not at all.
My favorite color is cobalt blue.
Cephalopods are badass. If I could be reincarnated, I would totally come back as a squid or octopus.

I’m not really going to tag anyone for this because I don’t follow many blogs yet. I’m just getting going with this thing. If anyone out there wants to answer my questions, just to amuse me, that would be awesome.

If you were going to do a retelling of any story in the world, what would it be, and what changes would you make?

What one story would you like to see made into a movie that hasn’t been yet?

What is your guiltiest pleasure read?

If there was only one book you could read for the rest of your life, what would it be?

What book would you have loved if it weren’t for that pesky ending?

What character in a book looks completely different in your head than they are described on the page?

Why aren’t you reading the Saga and Rat Queens comics yet?

Those are all the questions that I can come up with that are pretty easily translated to writers and non-writers alike. If you decide to answer them, feel free to leave them in the comments, or do this whole fun blog thing at your blog and let me know.

Robert McKay has been in love with books as long as he can remember, but it wasn't until he got to go to the middle school library that he really found his true passion in science fiction and fantasy. He first found them in the form of Choose Your Own Adventure books, but he didn't stop there. Soon he found fantasy books that were so big that he could hardly carry them. But carry them he did. Not long after, he started creating worlds of his own. His tendencies got him labeled as a weirdo and outcast. He stopped writing and barely read for a very long time. When he finally started reading and writing again, it felt like coming home. Though he tends to write science fiction and fantasy stories, they all tend to have an element of romance, whether he originally intends them to or not. If you want to hear more from him, he can be found on Twitter.
See all posts by Robert

The Witch With No Name
by Kim Harrison

The Martian
by Andy Weir
tagged: read-in-2015 and sci-fi

This Shattered World
by Amie Kaufman
tagged: currently-reading, sci-fi, ya, and read-in-2015